Skip to content Skip to main navigation
Past TOURS / Sidewalk Stories: Women of the Ward

Through the captivating stories of four resilient women, explore two centuries of history in The Ward, Toronto’s “first immigrant neighbourhood.” This walking tour breathes life into lesser-known chapters in the city’s past with theatrical presentations of the lives of Cecelia Jane Reynolds, Elizabeth Neufeld, Annie Whelan, and Jean Lumb. Led by John Lorinc and Tatum Taylor Chaubal, witness The Ward like you’ve never seen it before.

Developed in collaboration with John Lorinc and Tatum Taylor Chaubal.

During the tour, participants will encounter these four women through a series of live theatrical presentations:

Cecelia Reynolds – a young Black woman who escaped enslavement as a teenager through the Niagara region with the help of the Underground Railroad. Cecelia settled in Toronto’s Ward neighbourhood and started a new life, all while corresponding with her former enslaver in an attempt to purchase her mother’s freedom.
Written by Audrey Dwyer, Performed by Krystle Chance

Elizabeth Neufeld – a young Jewish social worker who was the executive director of Central Neighbourhood House, an organization dedicated to bettering the lives of the residents of the Ward. Energetic and outspoken, Elizabeth advocated for social programs and services for newcomers regardless of ethnicity, faith, or creed.
Written and Performed by Coleen MacPherson

Annie Whelan – a widowed Irish woman who became a bootlegger during the prohibition to support her family. Annie ran a speakeasy out of her own home, and was able to skirt fines and law enforcement for over two decades of this operation.
Written by Ali Joy Richardson, Performed by Rebecca De La Cour

Jean Lumb – a Chinese restaurateur who was a life-long advocate for the rights of Chinese people in Toronto and Canada. Owner of the Kwong Chow Chop Suey House and recipient of the Order of Canada, Jean galvanized fellow community members around saving the city’s original Chinatown from destruction and played a pivotal role in challenging the restrictive immigration laws of the time.
Written by Marjorie Chan, Performed by Julia Hune-Brown

John Lorinc is a journalist and editor. He reports on urban affairs, politics, business, technology, and local history for a range of media, including the Globe and Mail, Toronto Star, Walrus, and Spacing, where he is senior editor. John is the author of four books, including Dream States (Coach House Books, 2022), and has co-edited or project managed seven Coach House uTOpia anthologies, including The Ward (2015) and Indigenous Toronto (2021). He was the recipient of the 2019/2020 Atkinson Fellowship in Public Policy.

Tatum Taylor Chaubal is a writer, heritage planner, and Texan transplant, currently working in Toronto. She holds a master’s degree in historic preservation from Columbia University, where she wrote her thesis on interpreting the heritage of marginalized groups, specifically the LGBTQ community. She is also a co-editor of The Ward: The Life and Loss of Toronto’s First Immigrant Neighbourhood (Coach House Books 2015).

Krystle Chance is a multi-talented musical theatre/TV performer with over a dozen contracts and roles. Favorites include: The Killer Queen (We Will Rock You), Mary (Obeah Opera), Effie White (DreamGirl), The Lion (The Wizard of Oz), Medda Larkin (Newsies), Sharmain (Da Kink in My Hair). Behind the scenes, Krystle also has displayed her skills as a Music Educator as the Assistant Musical Director for “Once on This Island”, at the Lower Ossington Theatre, Co-Music Director Songs for a New World- Randolph College, Vocal Department Head at the Conservatory of Music and the Arts, and the Creator of Vocalfy (an online Vocal training platform).

Hailing from Newfoundland, Rebecca De La Cour has spent most of her life living and working in Toronto. She has done a lot of plays in a lot of places and has been a co-writer and performer on several collective creations ranging from sketch comedy to political satire for tv, radio, and web. Live theatre is her greatest passion and she always feels most at home when on the stage.

Julia Hune-Brown is a theatre artist and educator and occasional audio doc maker. She works with diverse communities directing and facilitating theatre projects in her hometown of Toronto and across Canada. Julia is a lead artist with The Amy Project — Artist Mentoring Youth and Jumblies Theatre. She is the 2020 recipient of the JAYU Arts For Human Rights Award for Established Artist. Julia recently finished creating a radio doc for CBC’s The Doc Project about her grandmother’s, Gar Yin Hune, immigration story and Cantonese Opera. She is currently working on a book for young readers about her grandmother.

Coleen Shirin MacPherson is an international theatre artist, playwright and director based in Toronto. She trained at École Jacques Lecoq in Paris and runs an all-female physical theatre company called Open Heart Surgery Theatre. She is Playwright in Residence at Cahoots Theatre (Toronto); part of the Bedrock Creators’ Initiative with Factory Theatre (Toronto) and has been developing the next five episodes of an audio-fiction podcast – a sonic theatre – called Wild Women. She has toured her work to Egypt, Poland, France, UK, U.S.A and China; and has worked with companies across Canada, in the UK, Northern Ireland and France. Coleen teaches collaborative forms of theatre practice, and has taught at Randolph Academy and the University of Toronto. She is currently developing her play, Erased, a new work in collaboration with Theatre Passe Muraille and York University. Coleen recently was Assistant Director at the Stratford Festival to Antoni Cimolino’s Richard III in the 2022 season and is part of the Langham Program of Classical Direction.

Led by and developed in collaboration with John Lorinc and Tatum Taylor Chaubal.

Image credit: Jean Lumb, Chair of the Save Chinatown Committee. Courtesy of the Jean Lumb Collection.

Sidewalk Stories: Women of the Ward

LOCATION:
Church of the Holy Trinity
19 Trinity Square
Toronto, ON
M5G 1B1

COVID POLICIES:
Tours will be in large groups of people. We recommend wearing a mask because physical distancing cannot be possible 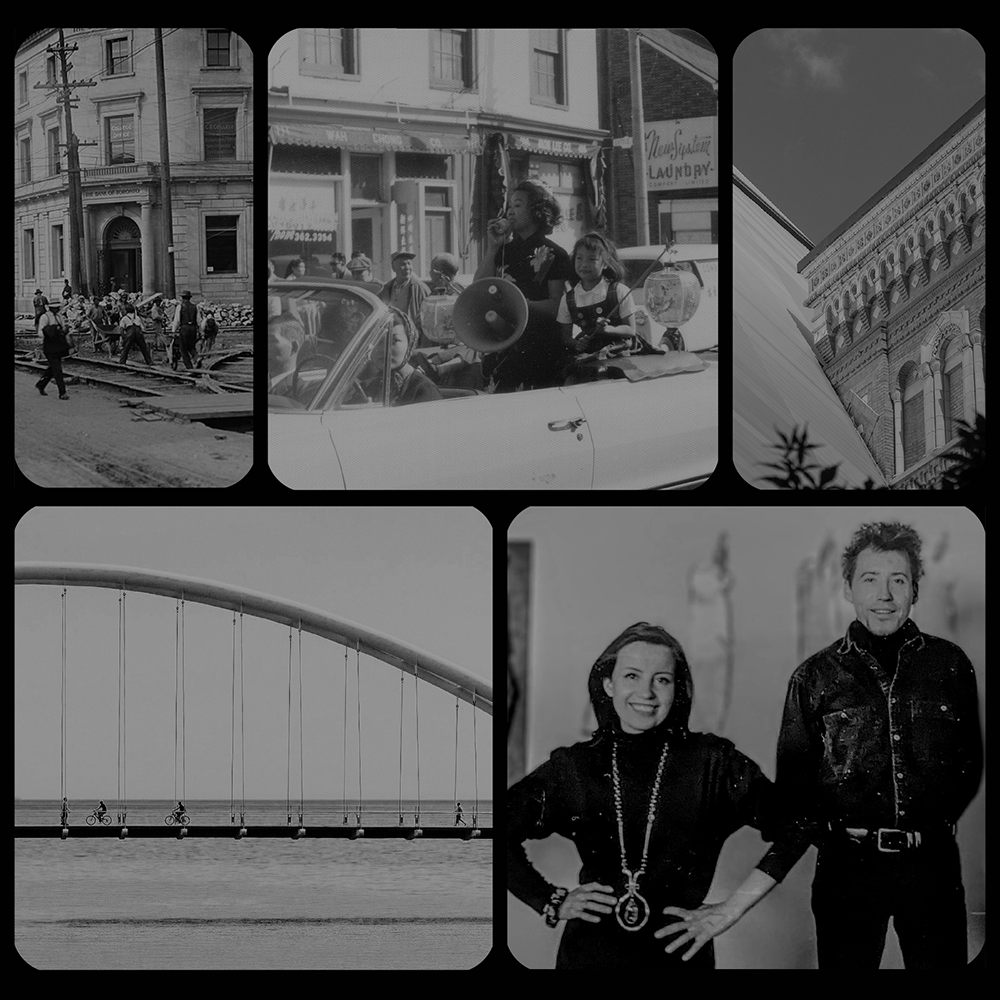 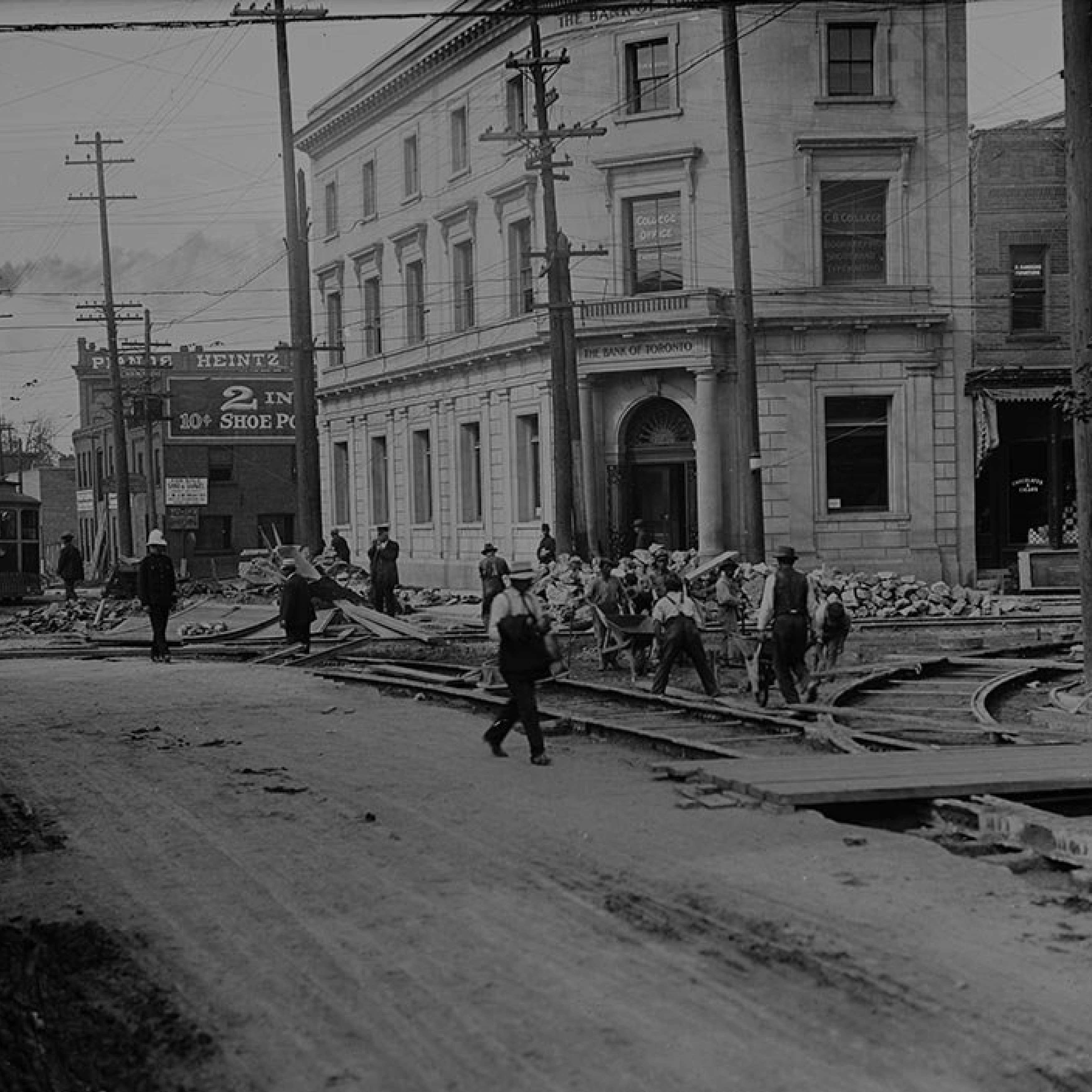