Ricker immigrated to Canada from Hong Kong in 1988. For 32 years, Ricker has not paid too much attention to his birthplace, and has lost contacts to all childhood friends. In June 16, 2019, he had a shocking awakening when 2 millions Hong Kongers marched in unity against an extradition law which will allow Hong Kongers to be extradited into mainland, notorious for its human rights violations. Seeing their bravery and courage when faced with rampant police brutality and oppression from the Chinese Communist Party, Ricker decides to use art to honor them.

After more than 10,000 arrests, Hong Kongers are now facing an even grimmer reality: persecution for merely shouting certain slogans, for possessing a protest flag in a backpack, or for simply having thoughts deemed subversive by the government. Teachers, professors, social workers, and many others who have joined the movement are now sacked, followed, arrested, or even “disappeared”.

Moved by Hong Kongers’ plight and their bravery, Ricker uses art to express his feelings of pride and awe towards them, and remind everyone the importance of democracy and freedom. Ricker hopes Hong Kongers seeing his art will be inspired to continue their fight. 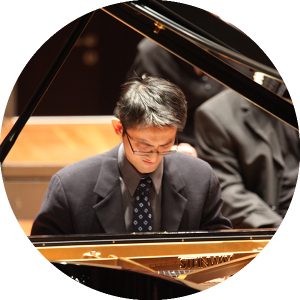 Ricker (www.rickerchoi.com) immigrated to Canada from Hong Kong in 1988, at age 13. He has a successful career in financial risk management, but music and painting are his true love. After earning the ARCT Diploma in Piano Performance at age 18, Ricker enrolled in York University’s Schulich School of Business, where he earned an undergraduate degree and MBA. (He also holds Chartered Financial Analyst and Financial Risk Manager designations.) Ricker started painting in 2013, at age 38. A chance free painting session at Paint Lounge ignited this new passion of his. He then started learning painting through YouTube videos.
As a pianist, Ricker has performed extensively in Toronto. He has been featured at Toronto Summer Music Festival`s Emerging Artists in Concert at Walter Hall, and with ​Off Centre Music Salon at Glenn Gould Studio many times. In 2011, he gave a solo recital at Four Seasons Centre. He has also performed piano concertos numerous times with a number of orchestras. His most memorable performances were at the Berlin Philharmonie’s 2500 seat Großer Saal and at Paris’ 1000 seat Salle Gaveau.

Back to QQ: Mixed Media
Back to the QQ Exhibit