Love in the Time of Quarantine” was made as a creative response to the new reality we found ourselves in during the first few weeks of lockdown. I was home alone for probably two weeks watching the news and decided I needed to create. This is before I adopted my kitten so my companions were Zoom calls and my plants. Thus, the introduction of the love interest! 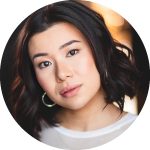 Life is a joke and Janet has learned to laugh along with it. She is a writer and actress who resides in Toronto. She writes screenplays, fiction, poetry, and more. Her work explores magic, horror, womanhood, and the Vietnamese diaspora.

Her short story “Found At A Yard Sale” received an Honorable Mention at the President’s Creative Writing Prizes. She received the Best Performance Award at the Chang Film Festival for “Installing…” a short she wrote and produced which was also featured as part of the National Screen Institute’s Online Film Festival. Her feature film “She Comes For You” was selected as part of Reelworld’s Emerging 20 Incubator program and as part of the Female Eye Film Festival’s Live Pitches.

Janet is currently completing her Screenwriting and Creative Writing degree at York University.

Back to QQ: Fiction
Back to the QQ Exhibit