This dramatic monologue portrays Stanley Grizzle, a Porter, activist, politician, and citizenship judge who reflects on his accomplishments and looks to the future.
Performed by Daniel Jelani Ellis.

Stanley Grizzle: My Name’s Not George: The Story of the Brotherhood of Sleeping Car Porters: Personal Reminiscences of Stanley G. Grizzle. Courtesy of Latanya, Sonya and Stanley Grizzle Jr.

After WWII, Toronto native Stanley Grizzle emerged as the leader of the Toronto chapter of the Brotherhood of Sleeping Car Porters (BSCP) . He became the key spokesman for the porters on an array of social, political and economic issues. Grizzle was a strong proponent of the notion that all humanity formed a brotherhood or fraternity—with all members of humanity deserving the same dignity and equality. Grizzle was one of the two members of the 1954 delegation sent by porters to Ottawa to speak directly to the government on the need for Canada to change its racist social policies. 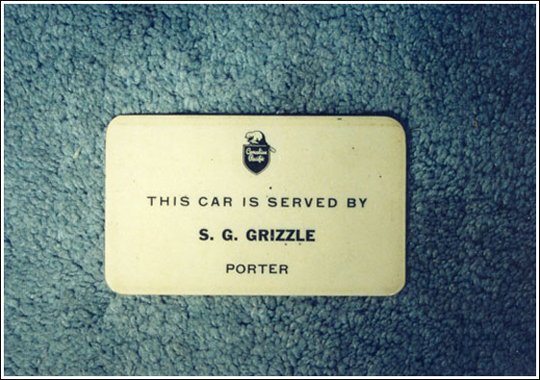 Stanley Grizzle’s name tag as a porter. He was elected president of the Toronto CPR division of the Brotherhood of Sleeping Car Porters in 1946. The Canadian Encyclopedia. Courtesy of Latanya, Sonya and Stanley Grizzle Jr.

Back to the Notable Porters
Donald Moore