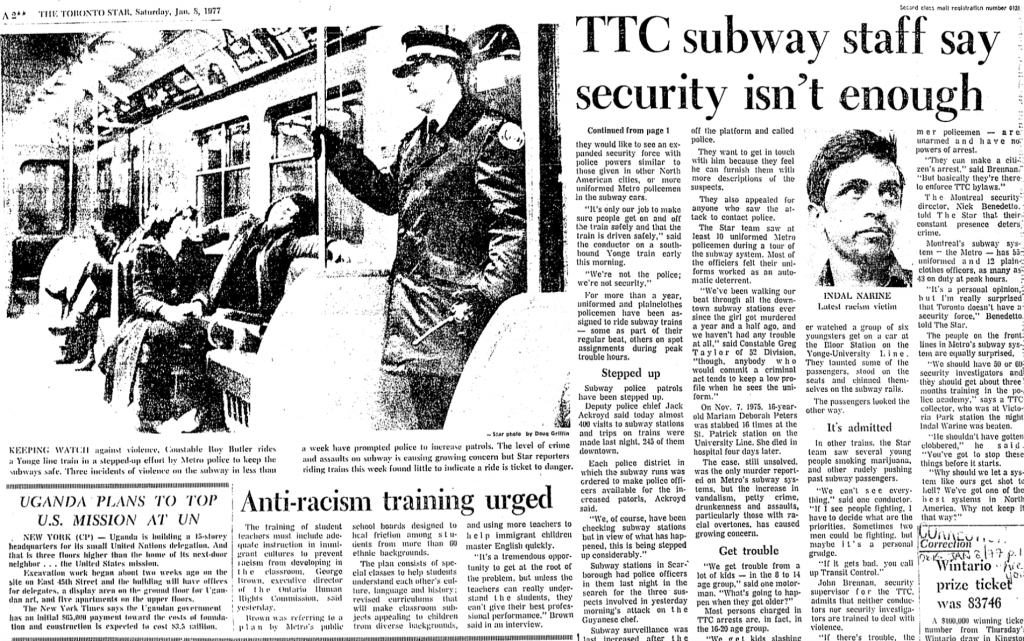 F or 30 years, the TTC did not allow patrons to ride for free on New Years Eve. The reason why points to a troubling period in Toronto’s history.

During New Years’ celebrations on the eve of 1977, a racially-motivated attack on Toronto’s TTC subway line alerted the public to a wave of violence against the city’s South Asian community, especially on public transit.

Only a few months earlier, a group of youth attacked 48-year old Tanzanian immigrant Shamshudin Kanji, pushing him off the subway platform and subsequently injuring him for life. After several calls for help by fellow subway riders, no one came to his help, and Kanji had to spend four months in hospital. Following the attacks, municipal officials and columnists sought to blame a number of factors, but community members from Indo-Canadian and Afro-Canadian communities noted that public resentment and insult was commonplace in Toronto.

Following a wave of immigration to Scarborough during the early 1970s, immigrants from South Asia and the West Indies began populating the GTA’s outlying neighbourhoods. Many did not take kindly to the influx of immigrants and ethnically South Asian peoples, especially given a lack of employment following a recent economic downturn. But the attack would spark an impassioned conversation among politicians, community leaders and police who fought to end racism and xenophobia in Toronto. Unfortunately, the attack also lead to a series of premeditated violence on unsuspecting victims.

Several attacks on South Asian and West Indian people continued into 1977, including the beating of a Guyanese chef, repeated attacks on specific residences, multiple verbal assaults and even an increase in high-school bullying, forced Toronto as a whole to take steps against virulent, racist violence.

Six days after the subway incident, a victim of a racist verbal assault in High Park went to the Toronto Star and spoke of her experience, and even included original poetry expressing a growing, shared sentiment.