How did a group of Porters’ trip to Ottawa plant the seeds for Canadian multiculturalism?

With the ending of WWII, Black people increasingly questioned their status in Canada.
Not only did Black men fight and die in the war but many of them worked on the hospitals on rails—special converted sleeping cars that transported wounded and sick soldiers returning home across Canada. All Canadians were first and foremost British subjects. This gave them many citizenship rights, such as the right to live in Canada and to have members of their family join them. With the exception of a few West Indians recruited to work as porters, Canada’s official policy was to exclude Black immigrants and visitors. Canada’s preference was for white or European immigrants. Black people took up the fight for equal treatment for all British subjects regardless of their perceived race or ethnicity. 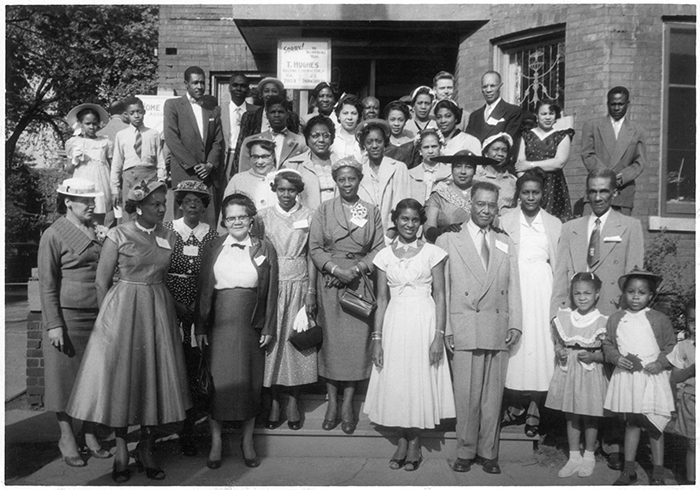 “The Negro Citizenship Association…was born in response to the continuing appeals of our brothers and sisters who were experiencing untold indignities and hardships occasioned by the wholesale rejection of their attempts to be legally admitted to Canada. At that time, not even close relatives were admissible […] Our Association was born out of the heartaches, the pain and suffering of the Negro himself […] It is growing because it is watered by the tears of the suffering Negro, and it is being fed by the milk of human kindness of our white brethren, as evident today.”
– Director’s Remarks on the presentation of the Negro Citizenship Association, April 27th , 1954. Delivered by NCA leader Donald Moore.

The Negro Citizenship Association was established in 1951 to give Black British subjects a voice in Canadian society. It was an umbrella group for many activist groups fighting for the same cause. Its members were primarily sleeping car porters and their spouses, if only because at that time jobs as sleeping car porters were the only work regularly available to Black people in Canada. Stanley Grizzle was a spokesman for the association as well as being the head of the Toronto chapter of the Brotherhood of Sleeping Car Porters. His brother, Norman, was also an official of the association that was headed by its founder Donald Moore, a former porter. 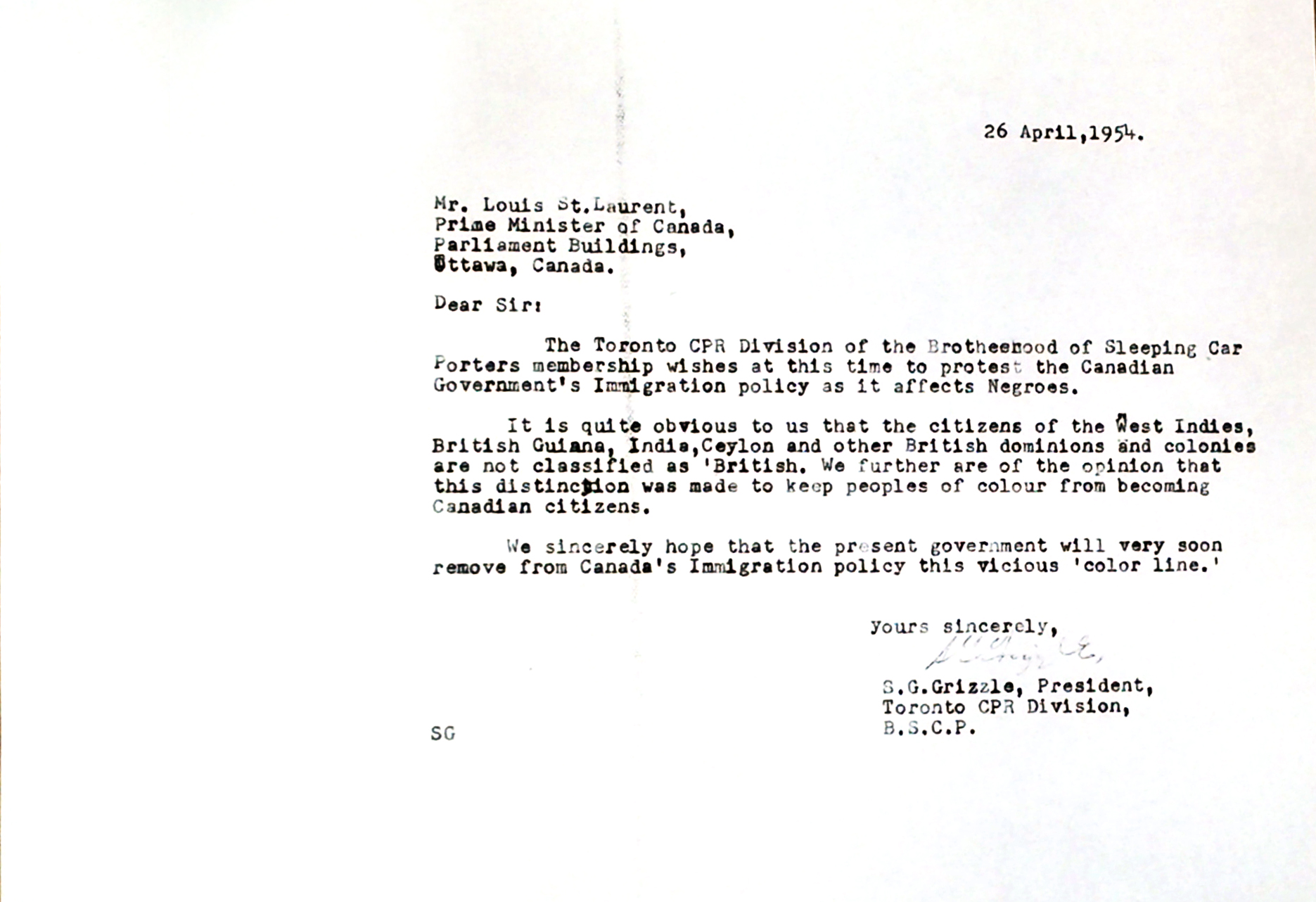 In 1954, a delegation of Black people fighting for greater citizenship rights decided to take their fight to the federal government in Ottawa. They assembled at Union Station in Toronto for the eight-hour trip on a Canadian Pacific Railway (CPR) train to Ottawa. The Toronto chapter of the Brotherhood of Sleeping Car Porters (BSCP), a trade union of Black porters, helped pay the delegation’s fares. The briefs presented by Moore and Grizzle would sow the seeds that changed Canada into a multicultural society.

Moore [back row, left] with three other members of the Ottawa delegation
The Canada Negro, Vol. 2, No.3
April-May 1954
City of Toronto Archives
Fonds 431, File 10, Item 1 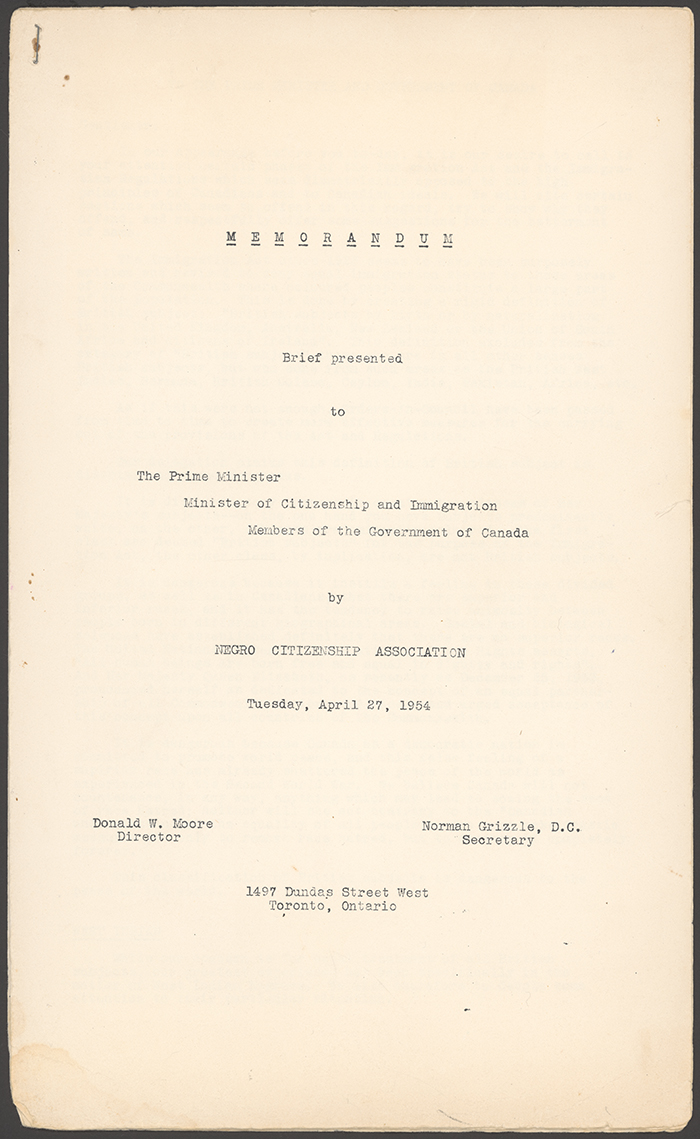 Memorandum-Brief presented to the Prime Minister, Minister of Citizenship and Immigration, Members of the Government of Canada by Negro Citizenship Association
Tuesday April 27, 1954
City of Toronto Archives
Fonds 431, File 1, Item 1

The delegation called on the Canadian government to stop its racist immigration policy that favoured white people. They recommended that Canada accept immigrants from all over the world. They argued for more immigrants in particular from the West Indies, India, Pakistan, China and Ceylon (now Sri Lanka). These were the “coloured” areas from which Canada limited immigration to a few thousand annually. The delegates called for a special program that would allow Black women from the West Indies to work in Canada as domestic workers. The delegates also asked the government to allow large numbers of non-white immigrants into Canada. They suggested that once these immigrants were settled, they in turn should be allowed to sponsor family members to join them as immigrants to Canada. When enacted, the changes helped to fundamentally change the face of Canada, making Canada a multicultural country.

“The members and officials of the Negro Citizenship Association and the Toronto C.P.R Division of the Sleeping Car Porters will continue to fight unremittingly for the right of all peoples of this planet to enterCanada and become its citizens without penalty or reward because of their race, colour, religion,national origin or ancestry.

Yes, we take the uncompromising position that what appears to be premeditated discrimination in Canada’s Immigration Laws and policy (is) utterly inconsistent with democratic principles and Christian ethics.”
– Statement by Stanley G. Grizzle. Courtesy of Cecil Foster.