Skip to content Skip to main navigation
Past EXHIBITS / MYSEUM INTERSECTIONS 2022 / Confinement and Contagion: COVID-19 & Health in the Prison System 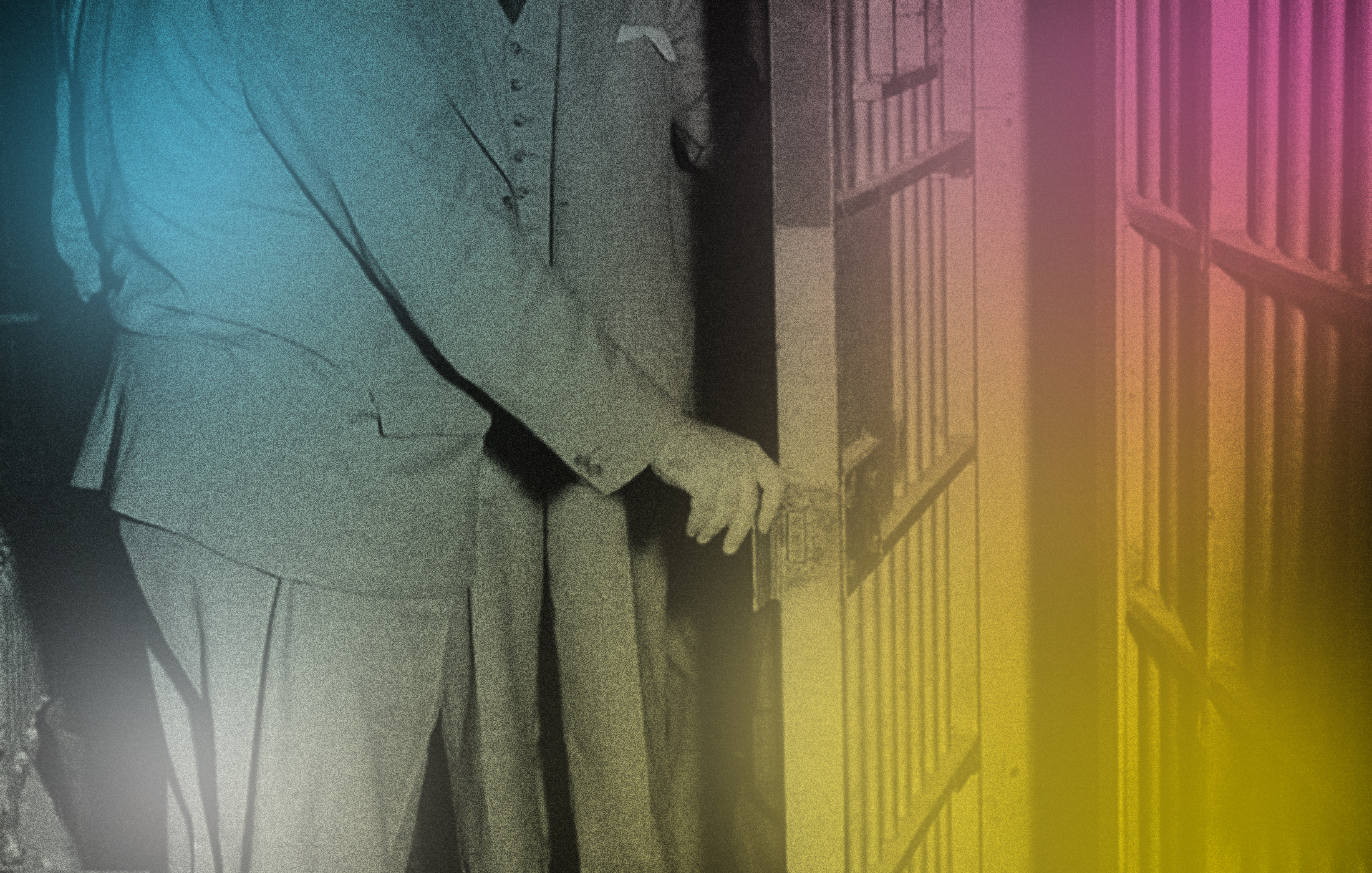 Confinement and Contagion: COVID-19 & Health in the Prison System is an exhibition and workshop series for people affected by the prison system to share their work and their stories. The exhibition will advocate for and educate on prisoner health, especially in light of the pandemic. Using storytelling, artworks and participatory workshops, Confinement and Contagion will bring awareness to the ongoing mental, physical, emotional and spiritual issues that prisoners and people who have been impacted by the system face. The project looks to support and extend solidarity with marginalized populations and advocates for the dismantling of oppressive systems. Learn more.

Kamilah Haywood is a BIPOC Queer Non-Binary writer, screenwriter, and music entertainment manager based in Toronto. They are the co-founder of the Chuuch Live Show, W.A.R Productions, and the International Writing workshop, and creator and panelist of the Urban Fiction Writing workshop with Kya Publishing and Toronto Public Library. Haywood is a 4-time published author signed to Canadian publishing company Kya Publishing. Their releases include Concrete Jungle, Diamond in the Rough, the last of the trilogy Diamond in the Rough Part 2, and their latest release The Hidden Track based on human trafficking in Canada. They are currently working on a fifth novel. Haywood co-founded The Chuuch (church) Live Show in 2020 due to the pandemic to give BIPOC, LGBTQIA, and Women artists, producers, directors, teachers, mental wellness workers, and entrepreneurs a platform to spread awareness in their community on IG Live. Haywood has been featured in a myriad of reading series, book expos and festivals, writing conferences, and workshops, including the Toronto Urban Book Expo, Naked Heart: The LGBTQ Festival of Words, and Black History Month events with Toronto Public Library.

Susana Meza is a queer multidisciplinary artist and poet from Maracaibo, Venezuela. She holds an Audiovisual Journalism diploma from La Universidad del Zulia. Her colourful paintings and embroidered wall-hangings are part of her quest for joy. Her poetry has been featured by the Writers Collective of Canada and focuses on the exploration of her multiracial identity and intergenerational trauma. In 2020, and for the course of two semesters, she facilitated a weekly virtual art drop-in for students of the Transition to Post-Secondary Education Program at George Brown College. She is passionate about peer support and is an Active Listener for Workman Arts members. More recently, Susana became a Newcomer Artist Ambassador for MABELLEarts, where she has facilitated creative writing workshops for youth. Susana works on her daily art practice from her studio in Toronto where she continues on reclaiming her roots and healing her wounds with art.

Ron Dalloway grew up on a mountain in a small easterly town. An obsession from adolescence was the art movement New Objectivity. Ron became interested in filmmaking after taking a film studies class in order to make up for some missing credits. Whenever possible, he chooses to walk.

Lex Talionis is a Toronto-born MC, poet, and survivor of the streets. He came up in the north of Jane & Finch, with roots in Ghana and Jamaica. Lex Talionis was formerly named Fresco P, during the early 2000’s. He was accepted into “The Remix Project” in the mid 2000’s and excelled in the music program, where he honed in on his musical craft, penmanship, and experience recording in a professional studio. Lex Talionis has a unique style of rapping, utilizing intricate bar structures and complex metaphors woven inbetween. He is a high-energy performer, and has opened up for artists such as Onyx, Babylon Warchild, and others.
“French Kiss The Razor” is a project created by Lex Talionis and long time friend Petersburg, who produced the project. The album was created after the two friends had not seen each other for over 5 years due to Lex being incarcerated.

Singer U is a musician/singer who has been a patient at CAMH’s Not Criminally Responsible (NCR) system for over 25 years. Singer U works in collaboration with DannyLion, who describes Singer U as having “a sweet, melodic embodiment with very pleasing harmonic range. He is a master of creativity and has the ability to create magic for any piece he is inspired to write. He is a pleasure to work with and has brought immense amounts of inspiration into my inner sphere!”.

DannyLion is an independent hip hop artist, producer, beatboxer and poet with a positive message to spread to the world. He is in the Not Criminally Responsible (NCR) system which is when the criminal justice system meets mental health. The outcome usually creates rather long sentences. He has been incarcerated for 11 years. DannyLion works in collaboration with Singer U.

Chad Potvin is a visual artist. Art to him in jail is his mental escape. When he’s drawing, nothing else matters and he’s able to just tune out the world of jail. Art is his escape. It helps him keep his mind strong because drawing uses lots of brain power. While he was in the federal system, he tattooed and his art paid for his food. He is a self taught tattooist and one day he would love to be known as one of the greats in the tattoo world. He also used to sit down with some lifer friends, hang out, draw, and rack their brains for ways to become better. Now after a decade of drawing he still believes. Art is about the joy he brings to the world.

Confinement and Contagion: COVID-19 and Health in the Prison System and associated events deal with difficult subject matter including: mental health challenges, addiction, trauma/abuse, racism, violence, and trafficking of youth. Please practice self-care and self-protection when interacting with the exhibition and associated events. If you find something challenging or need support, reach out to someone you trust, like a friend, family member, counsellor, Elder or other people who may be in your support system.

Confinement and Contagion is presented in partnership as part of Myseum Intersections 2022. This project is led by Defne Inceoglu and Revital Weiss, with contributions from PASAN, Toronto Prisoners’ Rights Project, and Literal Change.

Defne Inceoglu, MMSt., is a museum professional, researcher and project coordinator. They have led major research projects at the Royal Ontario Museum, the Museum of Contemporary Art Toronto and the Textile Museum of Canada. They volunteer as a literacy tutor and are an active member in political and organizing circles in Parkdale, their neighbourhood.

Revital Weiss, BES, MMSt, is a public program coordinator, arts educator, and former urban planner who is passionate about decolonizing institutionalized spaces through policy, engagement, and the arts. She has held education and public engagement positions at organizations including the Visual Arts Centre of Clarington, FENTSTER Gallery, and the Koffler Gallery.

Toronto Prisoners’ Rights Project (TPRP) is an organization of former prisoners, people with loved ones inside, front-line workers, researchers, artists, educators, and students working for prisoner justice and abolition. TPRP engages in direct action, public education and mutual aid to shed light on the harms of incarceration, connect prisoners to support, and build alternative forms of justice rooted in community care and accountability.

Literal Change is all about providing a positive academic setting for people who have struggled in the mainstream classroom. We work specifically to improve the literacy levels of communities and populations who have experienced limited access to educational supports and alternative learning strategies. Our team is made up of individuals from various walks of life and backgrounds. We have an understanding of the barriers that are being faced in vulnerable Toronto communities. We feel that everyone has a right to access education, and that with effective strategies and supports, individuals will be able to reach their career and academic potential. Current Campaign: Incarcerated Population of Ontario. Literal Change is currently operating in Toronto’s two maximum security detention centres, The Toronto East Detention Centre and The Toronto South Detention Centre.

Myseum Intersections 2022 is funded by the Government of Canada.

Confinement and Contagion: COVID-19 & Health in the Prison System

COVID POLICIES:
NPCC is operating at normal capacity limits within its facilities. All individuals 2 years of age and up inside NPCC must, at all times, wear a mask which covers their nose, mouth and chin or provide proof of a medical exemption from the requirement to wear a mask. NPCC no longer requires proof of vaccination, but may implement proof if necessary.
Additional Information

DIRECTIONS:
By TTC: From Kipling Subway Station, board the West Mall 112 bus. Disembark at the intersection of West Mall Crescent and Dundas Street West. Walk to Neilson Park Creative Centre’s parking lot entrance where you will see the building at the edge of Neilson Park.

By Car: Neilson Park Creative Centre is 0.5 kilometers south of Bloor Street West and Neilson Drive, west of The West Mall and Bloor. 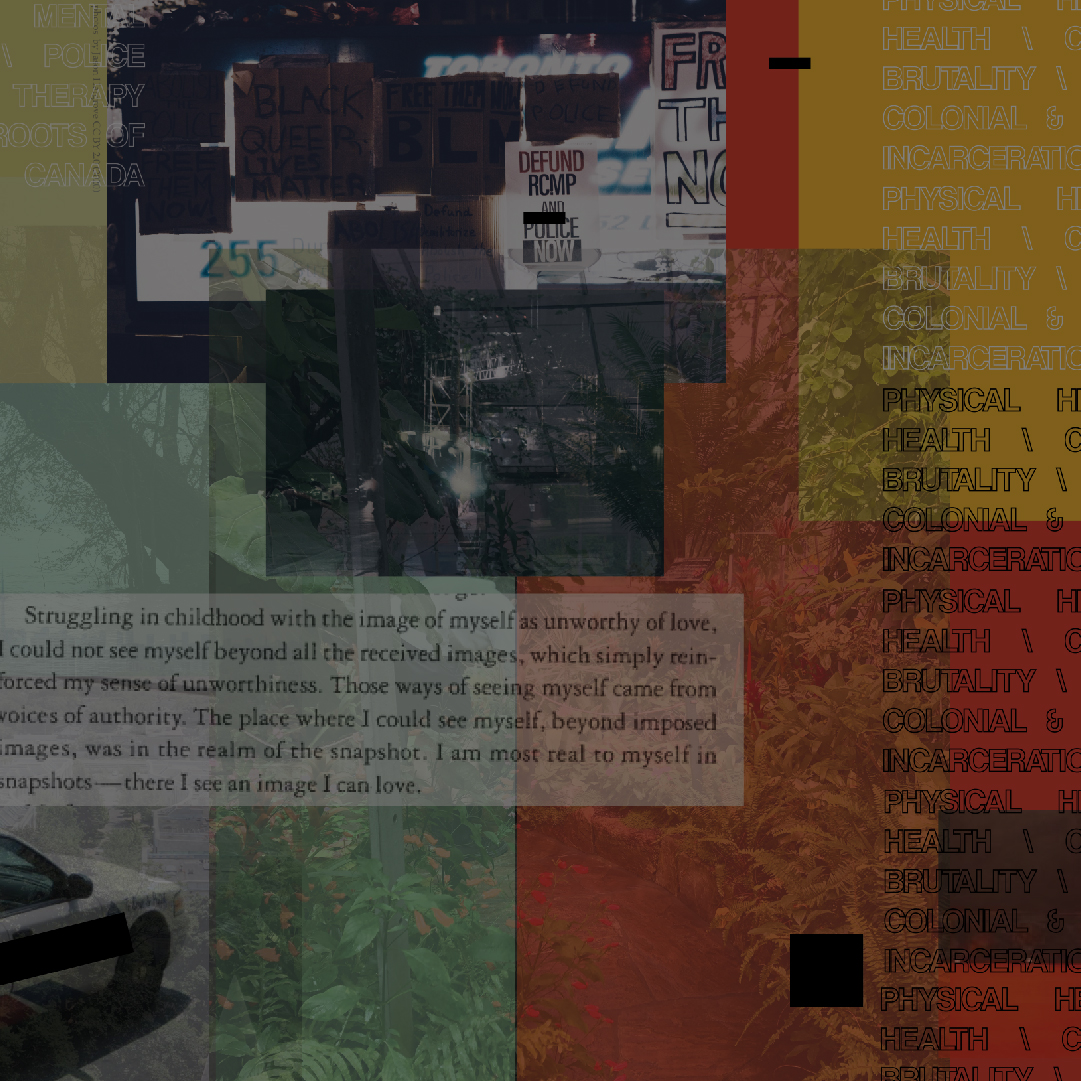 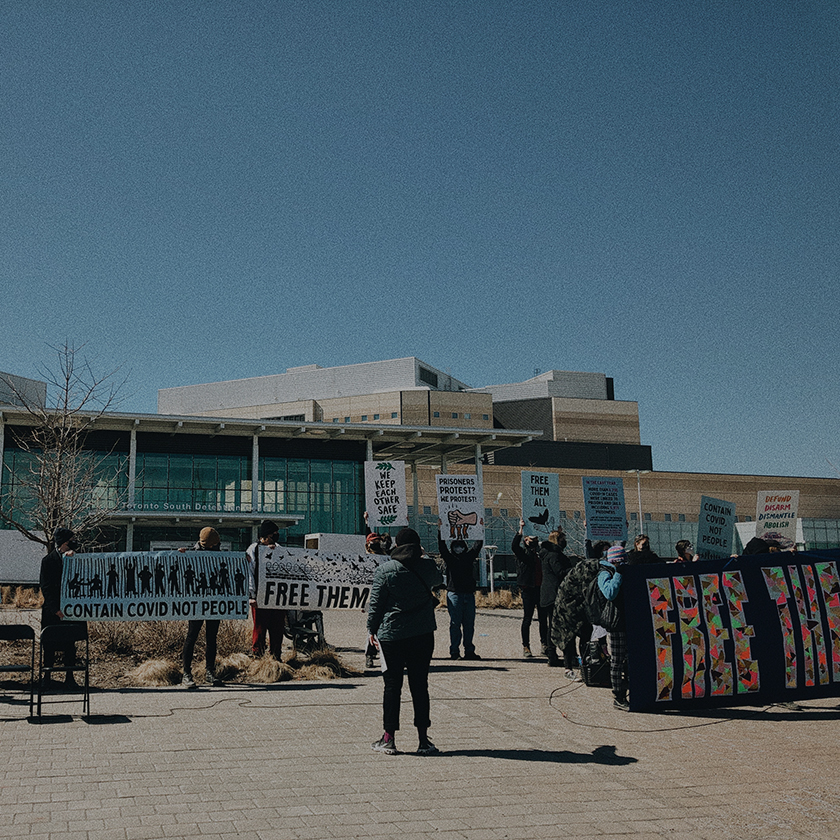 Confinement and Contagion: Health and Harm Reduction Inside of Canadian Prisons – Informational Workshop 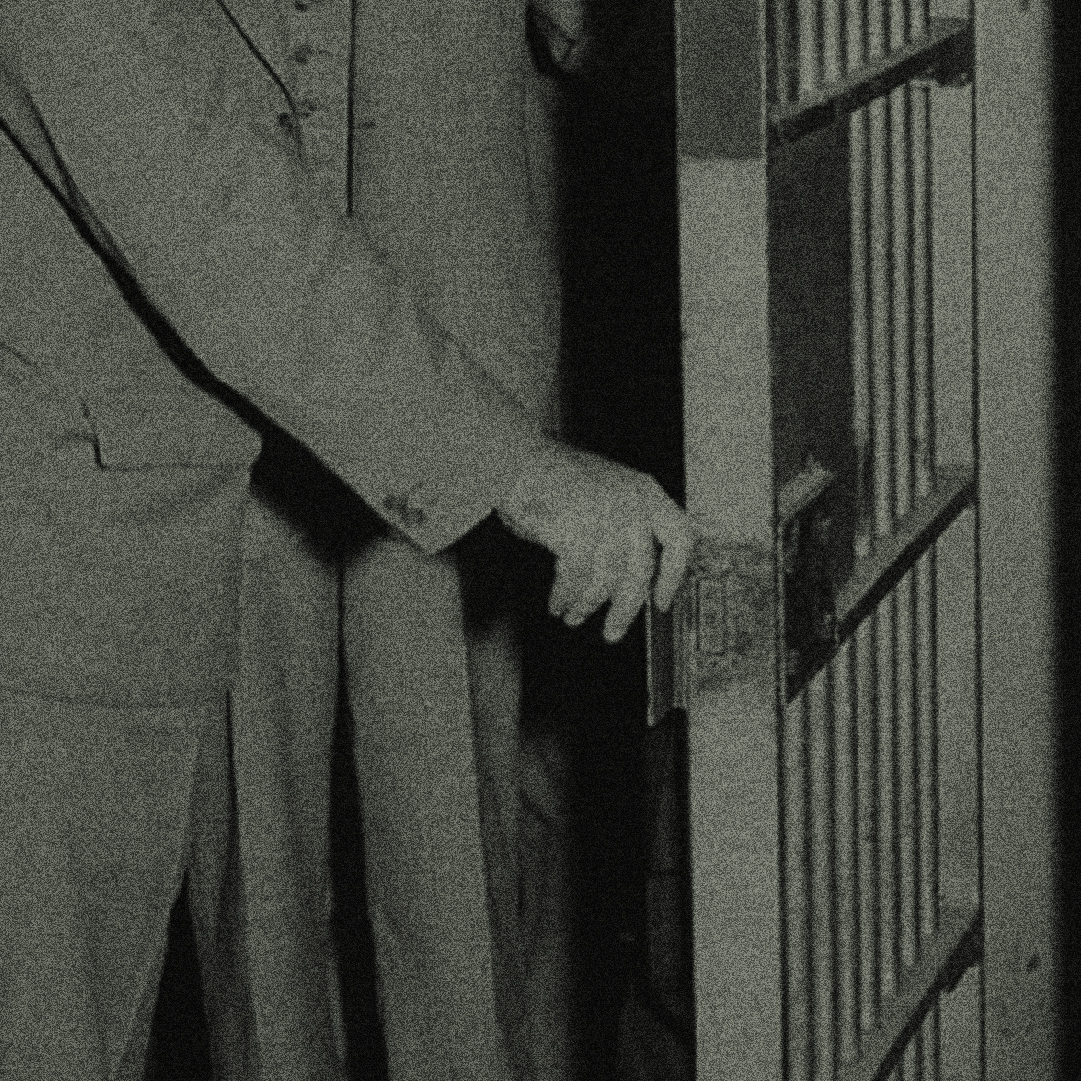